We are very pleased to have Professor Tamer Başar as our guest speaker for this week’s special social hour on Friday, April 14 at 3:00PM in 369 CSL. Prof. Başar will talk about his prime years at CSL – evolution of the CSL over several decades and how his research portfolio has evolved in parallel. 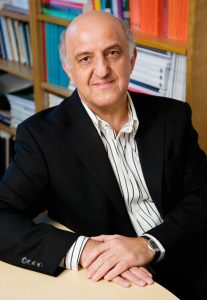 Bio: Professor Tamer Başar received B.S.E.E. degree from Robert College, Istanbul, in 1969, and M.S., M.Phil, and Ph.D. degrees in engineering and applied science from Yale University, in 1970, 1971 and 1972, respectively. After stints at Harvard University, Marmara Research Institute (Gebze, Turkey), and Boğaziçi University (Istanbul), he joined the University of Illinois at Urbana-Champaign (UIUC) in 1981, where he is with the Department of Electrical and Computer Engineering, is the Director of the Center for Advanced Study, and carries the academic titles of Swanlund Endowed Chair, Center for Advanced Study Professor of Electrical and Computer Engineering, Professor at the Coordinated Science Laboratory, Professor with the Information Trust Institute, and Affiliate Professor at the Department of Mechanical Science and Engineering.

Dr. Başar is a member of the National Academy of Engineering and of the European Academy of Sciences, and is also Fellow of IEEE, IFAC, and SIAM. He has an extensive list of publications in systems, control, communications, and dynamic games, including books on non-cooperative dynamic game theory, robust control, network security, wireless and communication networks, and stochastic networked control. His current research interests include stochastic teams, games, and networks; security; and cyber-physical systems. Among some of the honors and awards he has received are: IEEE Control Systems (Technical Field) Award (2014), Isaacs Award of ISDG (2010), Richard E. Bellman Control Heritage Award of the American Automatic Control Council (2006), Giorgio Quazza Medal of IFAC (2005), Outstanding Service Award of IFAC (2005), Hendrik W. Bode Lecture Prize of the IEEE Control Systems Society (2004), IEEE Millennium Medal (2000, Axelby Outstanding Paper Award (1995), Medal of Science of Turkey (1993), and several honorary doctorates and professorships.