The final social hour of the semester will be held from 3PM-4PM in Room 141 (note room change!).

Everybody affiliated with CSL is welcome at the social (students, postdocs, faculty, research scientists, etc.). 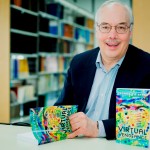 This week, our speaker is Thomas Starr (a CSL alum), who will talk about his new book “Virtual Vengence”, an exciting sci-fi novel set in the Coordinated Science Laboratory.

Virtual Vengeance provides a suspenseful journey into a future world, exploring the provocative question of ‘What distinguishes man from machine?’ In this world, everyone is taught by machine, never realizing the extent that machines are manipulating their every want and desire. Powerful forces in business and government conspire to exploit man’s total dependence on machine, and set out to control the world. In this murder mystery, we follow an unlikely protagonist, an eccentric Russian teacher, who innocently investigates some glitches in his teaching programs, and begins to see behind the seemingly benign screen to the evil that lurks. His struggles against the machine extend past his own death as he works beyond the grave to solve his own murder.

Biography: Tom Starr is a Lead Member of Technical Staff at AT&T Laboratories in Hoffman Estates, Illinois. Tom is responsible for the development and standardization of local access and home networking technologies for AT&T’s network. These technologies include ADSL, HDSL, SHDSL, VDSL, G.fast and G.hn. Tom was named “one of the 100 most powerful persons in telecommunications” by Global Telecoms Business magazine in 2010 for being “a true architect of the broadband availability the world enjoys today.” In 2009, Tom received the prestigious AT&T Science and Technology Medal. Tom serves as President of the Broadband Forum and has also served as a member of the Board of Directors from the inception as the ADSL Forum in 1994. Tom is also a distinguished fellow of the Broadband Forum From 1988 to 2000, Tom has served as Chairperson of ANSI accredited standards working group T1E1.4 which develops xDSL standards for the United States, received the Committee T1 Outstanding Leadership Award in 2001, and now serves at ATIS COAST-NAI Chairman. In the ITU-T SG15, Tom serves as Chairman of Working Party 1, addressing fiber, DSL, and home networking standards. Tom participates in the ITU SG15 Q4 group on xDSL international standards. Tom is a co- author of the books “DSL Advances” published by Prentice Hall in 2003, “Understanding Digital Subscriber Line Technology” published by Prentice Hall in 1999, “Broadband Access” published by Wiley in 2014, and author of the Science Fiction novel “Virtual Vengeance.” Tom previously worked 12 years at AT&T Bell Laboratories on ISDN and local telephone switching systems. Twenty US patents in the field to telecommunications have been issued to Tom. Tom holds a MS degree in Computer Science and a BS degree in Computer Engineering from the University of Illinois at Urbana-Champaign.

This is the final social hour of the semester. The social hour will resume in Fall 2014. We are looking for people to coordinate the social hour as well as the CSL student conference. If you are interested, please email ligo2 [at] illinois.edu.